Our Economy and "Chimerica"

Here's an interesting take on the financial crisis taking place in the U.S.

Fun Pictures from our Christmas Break

Well, seeing as Chris starts teaching again today and goes back to school (for his last semester!) on Wednesday, I figured I should post some pictures from our Christmas break. We had a fun and low key Christmas in Idaho Falls, played in the snow, Chris went ice fishing several times (I went with him once), and mostly we just enjoyed being together as a family.

Christmas:
Christmas morning was a lot of fun. We got to talk to my brother Tim who is on a mission in Mexico and then we spent a leisurely morning opening presents. It was really fun because there was only my parents, my little sister and us, so we decided to just take turns and open presents one at a time. Whoever opened the present then got to go pick another present for someone else to open. It was really relaxing, not overwhelming for William and it was fun to be able to see what everyone else got and to spend time together as a family. We definitely are going to make that one of our family Christmas traditions.
William had a lot of fun opening and playing with his presents 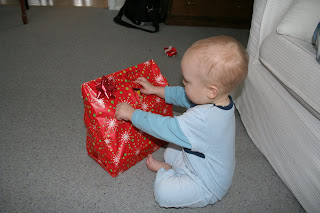 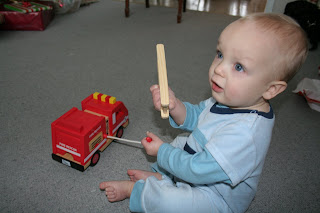 My mom made us this awesome afghan that we love to nap on the couch with! 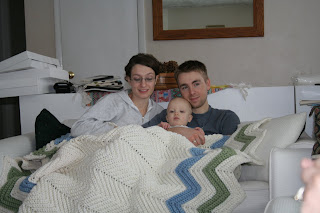 Later in the day we went over to Chris's parents and opened presents there. William loves drawing with his doodle pad! 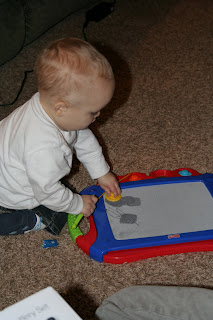 Playing in the Snow:
My mom got this toddler sled from one of their neighbors quite a while ago, and so we pulled it out this year. If you can't tell by the look of glee on William's face (click on the picture to make it bigger, and it's much easier to see), he LOVED going down the hill on the sled and being pulled really fast. It was really awesome that my parents happen to have a big mound of dirt (due to some construction) covered with snow in their yard. It was the perfect size for William to go down. Playing in the snow was a lot of fun for all of us! 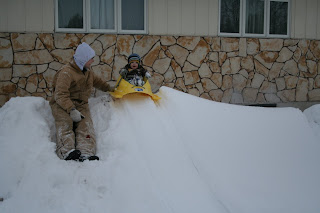 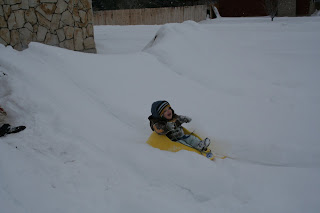 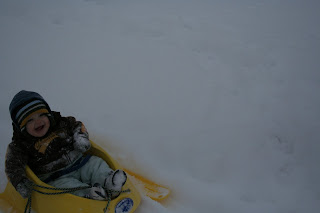 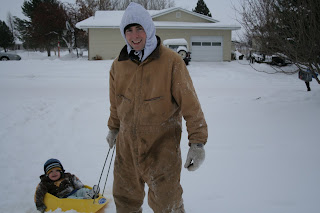 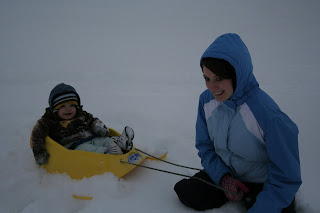 We also had fun sliding him along the street 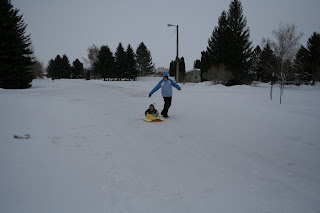 Afterward his nose and cheeks were so cold and red! 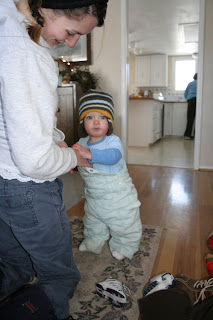 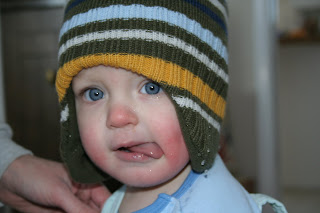 Random other Pictures:
William has oatmeal for breakfast pretty much every morning and since he always insists on feeding himself (which I don't really mind) this is often the result: A happy boy with a very messy face! 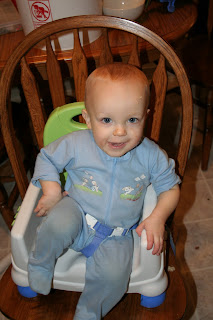 On New Years Eve I was taking down the Christmas tree and Chris decided I needed a little decorating. What do you think? Does the Cleopatra look suit me? 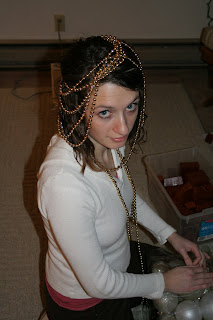 Since Chris started getting all his ice fishing stuff out William begs and begs to play with his poles. Finally Chris rigged this one up for him and he has had a blast with it. We have done the sign for fish with him a lot, but he really got it the other day when Chris brought home some fish and William was watching him gut them. Now he does it whenever he sees pictures of fish, whales, dolphins, or the real thing. It was cute how fast he got the idea when he saw a fish for real. 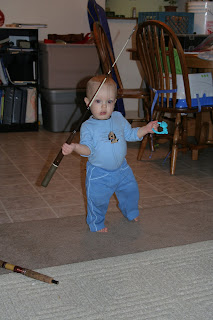 All in all, it was a very enjoyable break and we are sad to see it go!
Posted by Cutler Family at 9:21 PM 2 comments: