Wow! I think two posts in one day might be a record for me! I just wanted to show some pictures of a couple projects I completed recently. 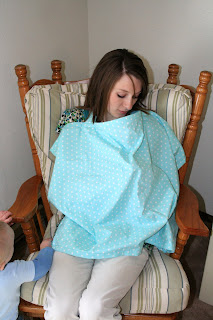 (No-there isn't a baby in there! Gotcha!) 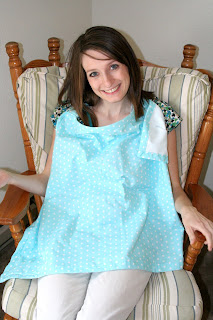 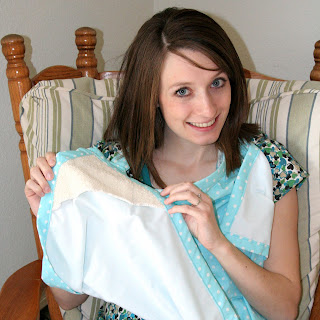 I have been wanting to try this one for a while since my next door neighbor has made quite a few and they have turned out great. I am really excited to have this as a gift option since the overall cost is about 4 dollars (depending on how expensive the fabric is--could be less!) and my first attempt where I was kind of just figuring it out only took me about an hour and a half. Next time it should be even faster! I was very pleased with the result. 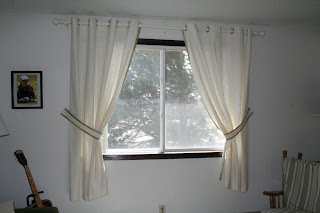 I would post some more up close ones, but for now this will have to do since my computer is being kind of dumb and I've already uploaded several of these pictures twice.
I wanted to make curtains forever, and finally figured out what I wanted, so I did it! They aren't perfect, but I was pretty happy about the way they turned out. Can you tell that I'm kind of a minimalist when it comes to putting color in my decorating? Just so you know, however, the curtains aren't just bright white, like the picture makes them look. They are actually an off white linen, so I love that they have texture and a little bit of warmth. It was nice also, because my parents just replaced all their windows and put in french doors in the back, so my mom had a curtain rod she no longer needed. We just painted it to match our entertainment center (No, it is not bright white either, it actually is a dark white with a green tint) and voila!
Posted by Cutler Family at 2:37 PM 6 comments:

I have to post a list of some funny things William has done lately, mostly just for preservation sake.

-The other day all three of us were snuggling on the couch and Chris's pant leg had come up a little exposing some skin. So just to tease I said "William, pull Daddy's leg hair." His little fingers just reached right over, grabbed a hunk of leg hair and pulled!! I was laughing so hard because it was hilarious, but my biggest question is that if he can understand what I mean when I say THAT, how is it that he CANNOT get the idea that he is supposed to stay out of the trash? I mean come on...which do you think is a more difficult concept?

-As I was getting ready one morning William reached up on the bathroom counter, grabbed my deodorant and proceeded to try to shove it up his shirt. :)

-We were at my mom's house a couple of weeks ago, and she stood him on the kitchen counter and told him to jump to her. And he totally tried to jump! It was hilarious, because of course he couldn't really get off the ground (or counter in this case) but he was bending his knees and pushing up so hard that he almost started catching some air. I don't remember EVER telling him what jumping is, and I have no idea how he got the concept so clearly in his mind. Kids are crazy!!

-William always know immediately if there is something "Ummy!" in the vicinity. The other day Chris came home from teaching and put a brown lunch sack that had the top rolled down on the computer desk. I saw it there a little later and wondered what it was so I unrolled the top and looked inside. William, who was standing on the ground at my feet immediately went crazy making the sign for candy and saying "Ummy, Ummy, Ummy, Ummy!!!!" How the heck did he know that the bag had laffy taffys in it??

-Yesterday William asked to watch a movie, and since he has a cold and I'm a softy when he's sick I decided to put one on for him while I did my hair and got ready. After a little while, he came walking into the bathroom with my cell phone, handed it to me, turned around and went back to his movie. I looked at it, and sure enough, there was a voice mail. It must have been ringing, so he reached up on the desk, got it down and brought it to me. SO CUTE!!

-William is already indoctrinated into the concept of fishing. A while ago, before he said many words, he was sitting on our bed while Chris and I were doing stuff in our bedroom and for some reason Chris's fly rod case (Which doesn't really look like a fishing pole) was on the bed. William immediately went to it, started trying to open it, and said very clearly "Pole! Pole! Pole! Pole!" I have no idea how he knew what was inside, but he did, and I count Pole as one of his first really recognizable words.
Posted by Cutler Family at 10:10 AM 3 comments:

Well, here it is, Sunday evening, I have just put William to bed, Chris is reading a book for a paper he is writing (aka sleeping on the couch :)) and I am surrounded by debris. There is cooking debris in the kitchen, all the dinner stuff still on the table, the living room floor is covered in stuff that William pulled out of the diaper bag, including all the wipes which are torn into pieces and scattered around, there are grapes smashed on the floor etc. etc. etc. And....

I thought this was the perfect time to sit down, grab a bowl of fruit loops, and look through some pictures we had uploaded, but I hadn't had a chance to look at. And look at me now...grinning like crazy, and knowing that I can't keep this happiness to myself! So don't you feel lucky that Chris is asleep, and you get to share in my wealth?! You've got to admit, this first one is priceless! (Click on it to make it larger and the effect is much better) 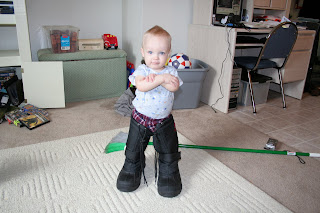 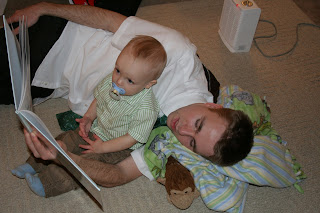 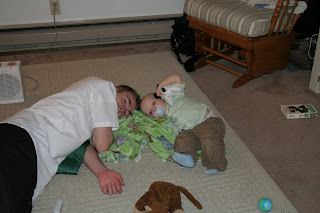 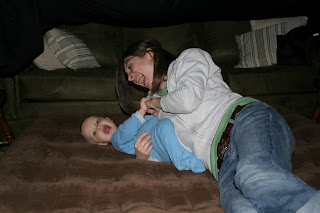 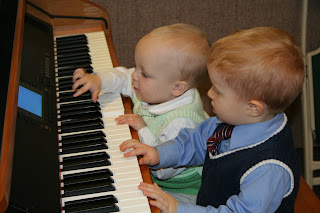 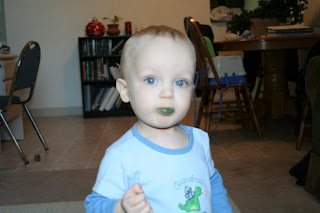