Isaac is the sweetest little man ever. Here are some things about him lately.
Isaac loves to draw. It's kind of strange to me because William has never been much interested in drawing or coloring, but Isaac will do it for a long long time. Look at the way he's holding the pencil. Not bad for a 17 month old don't you think? 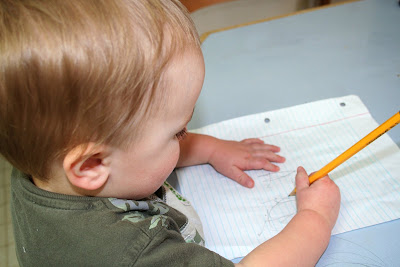 One thing about his love of drawing is that he doesn't discriminate what he's coloring on. He's fine with drawing on the wall, 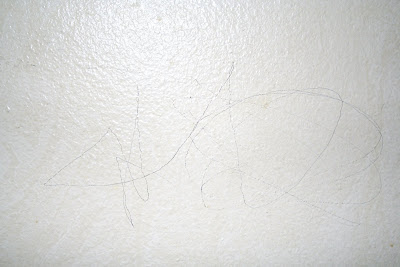 he likes to take a break from the paper and color the counter, 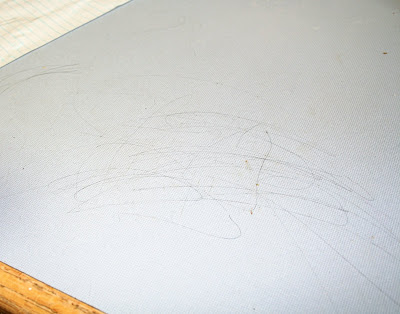 but his favorite place of all is the freezer. I will often catch him grabbing a writing utensil and sprinting for the freezer to get some color on it before I can stop him. This picture is after I had scrubbed all the coloring off a couple days before. 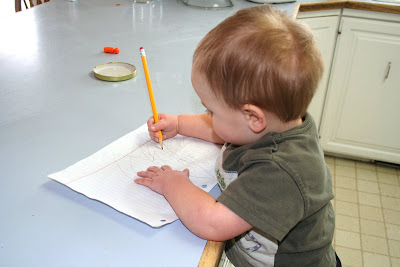 He can also be quite the little ham. He sings all.the.time. It's one of my favorite things to hear him about his busy little work of constant destruction singing as he goes. 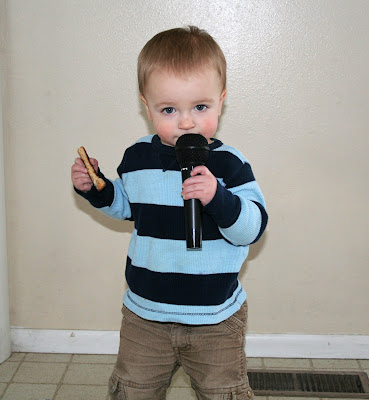 Speaking of constant destruction, this (picture below) is how he likes to read magazines. This kid gets into EVERYTHING. He can pull every item out of every drawer and cupboard, tear the label off anything with a label, pour cocoa powder, powdered milk, or laundry detergent all over the floor faster than you can blink. Some days I feel like I spend my whole day trying to pick up the current mess as he joyfully runs to his next project of havoc. 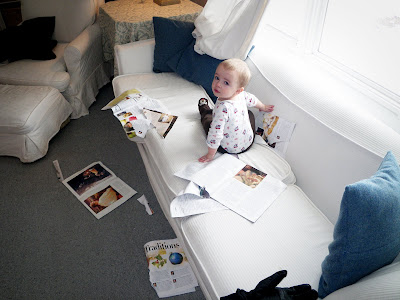 I know this is another coloring picture, but I just want you to notice the stool that Isaac is standing on. It makes me laugh because William went through a phase a while ago where he had to be standing on this same stool at the counter if any adult was in the kitchen. Now Isaac does the same thing. He loves standing on this stool at the counter, sitting at the stool playing, or pushing the stool around. It's a little bit bad because William still has some attachment to the stool, which can cause some conflict, but Isaac has pretty effectively taken it over. 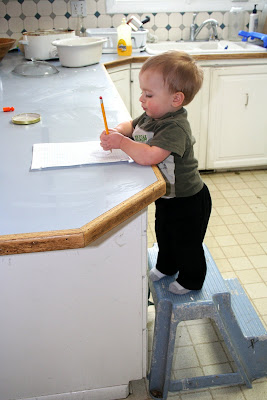 One of Isaac's favorite things to play with is the plunger. It doesn't seem to matter where I hide it, he still seems to find it at least once a week. I have actually considered buying a brand new unused plunger labeling it with Isaac's name and letting him go to town. I might still do it. When he does get ahold of the plunger his first choice of activities is to dress it. He will go back and forth from the laundry basked to the plunger adding layer after layer of clothes. I would have taken a picture, but for some reason he really prefers using mine and Chris's underclothes. Let's just say that I try to circumvent this activity as often as possible. 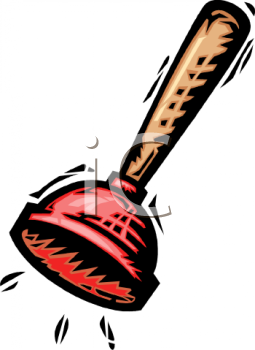 Isaac doesn't talk a whole lot, but his babbing and singing sure sounds like talking. He does say "Where is it?" "What" "Dog" "Woof Woof" "Daddy" "There it is" "Thank You" and a few others I can't think of at the moment. He has also become much less stubborn about signing, and signs quite a bit now, although not as much as William did at this age. I have to say that it's basically impossible to refuse him anything when he looks at you with his big eyes and signs "more please".

He is such a joy to have in our family! Today William threw a big fit because I was holding Isaac and he wanted Isaac to come play with him. Although they do fight a fair amount, they are starting to play together more and more, especially rough and tumble sorts of things where they run around and laugh like crazy. I love it!
Posted by Cutler Family at 9:27 AM 6 comments: