Last Saturday (Sept. 18) my friend Elizabeth and I ran the Top of Utah Marathon (26.2 miles). Here we are coming into the finish after 4 hours and 55 minutes. You can tell that we aren't tired at all :). Our running time was actually around 4:38, which was right around our goal time, but we ended up having to spend more time in line for porta potties than we had anticipated. All in all I was glad that we finished in under 5 hours, and by the 22-23 mile I just wanted to be done so bad that I didn't care what time we finished as long as it was over. 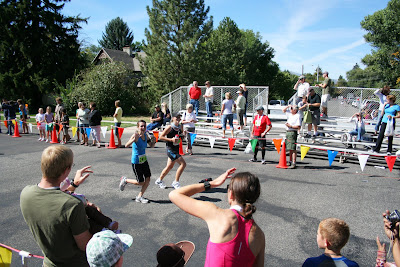 Right after the race-holding my medal. I decided that the medal is not enough compensation. 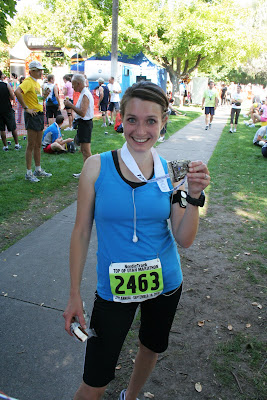 And the sweaty friends! So glad Elizabeth was there running beside me the whole way! I am SO glad I didn't try to run it on my own. 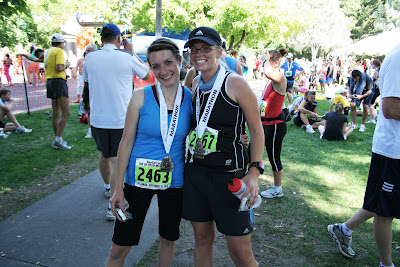 Toward the end of the race I just kept thinking about how much I wanted to see my family. I saw someone that I thought was Chris holding Isaac a little ways before the end and was so excited, but then realized it wasn't him. It made it even better when I did see them! After the race the runners come out in the "runners coral" where families aren't allowed, so I talked to them through the fence and shared my ice cream sandwiches. 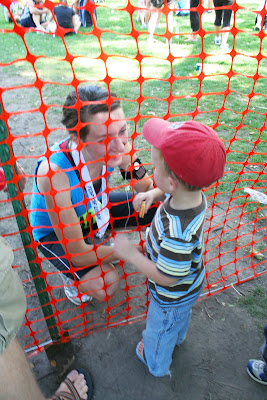 I really really love this guy! I can't tell you how much it means to know that he is always there to support me, even when I decide to do crazy things like run a marathon. I don't know what I would do without him. 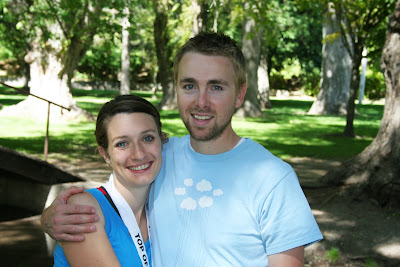 And he must really love me-because he hugs me even when I am sweaty and gross! 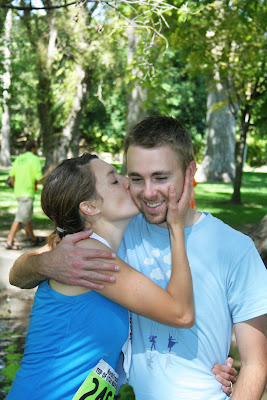 Not long after we stopped running I started feeling pretty terrible, especially when I was standing in the hot sun. I was really light headed and nauseous and would have to sit in the shade for quite a while before I started feeling better. Then I would get up and think I was fine for a while, just to realize that I wasn't. This face is a really good indicator of how awful I felt! 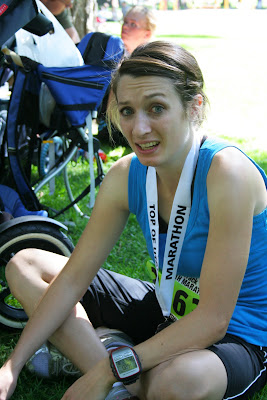 The nice thing was that the park where the race ended was mostly nice and shady and had this fun little creek for the boys to play in, so I just sat down in the shade for quite a while and recuperated while William and Sebastian ran around and had a great time. 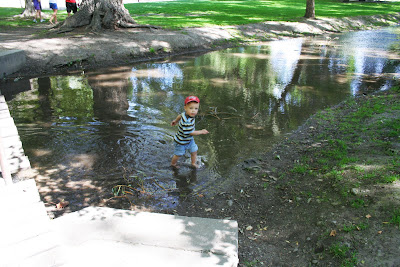 I love their cute rolled up pant legs! 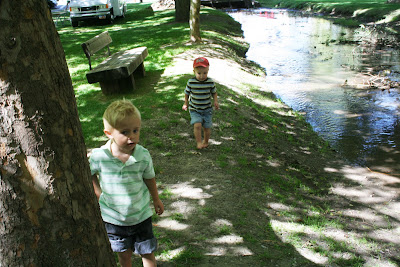 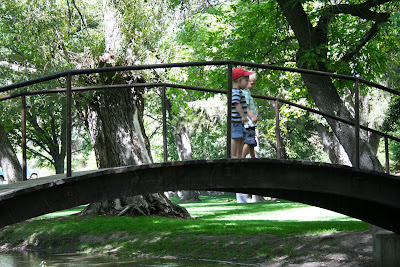 Isaac had fallen fast asleep with his mouth open in the stroller and slept the whole time we were just sitting around trying to recover. 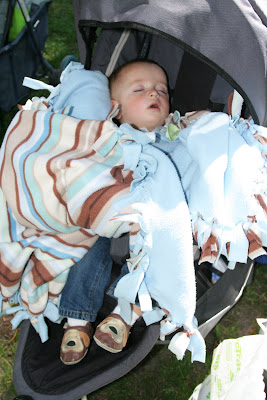 I decided that for me, running a marathon was a lot like childbirth. I did my best to prepare, but didn't really know what to expect. For the first quite a while it was exciting and fun because you know you are doing something really cool. Toward the end it gets really really hard, and you really just want it to be over. And then it suddenly IS over, but the difference is that in childbirth you have this beautiful little baby that totally compensates for all the pain you just went through. When you are finished running a marathon--it is just over. Afterwards with both you feel somewhat miserable, except with a marathon you don't have this sweet little baby who is dependent on you for everything and makes cute sleeping noises. You just have a medal and the knowledge that you did something really hard.

All in all I was glad I did it and I don't regret it at all, but I seriously doubt I will ever do it again!

Tim's Home!!
Here are some of us waiting Monday evening for his plane to arrive. His plane was scheduled to come in at 5:45, and my dad had checked that it had left on time. We were of course trying to get the last bit ready at home and hadn't left yet at 5:00 when we got a call from Lyndon and Bonnie at the airport saying his plane was now coming in at 5:21. My parents jumped in their car and went, and Chris and I grabbed the kids as fast as we could. We arrived at the airport at about 5:23 and ran inside to find that the plane was now scheduled to come in at 5:47, and actually didn't come until about 5:50. It was pretty funny, and we were all relieved that we hadn't been late. :) 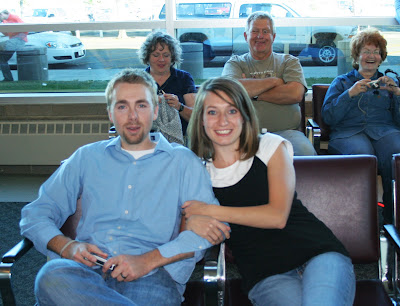 My cute little sister and my baby. 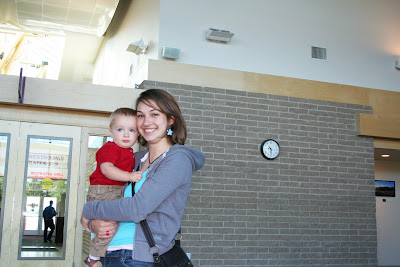 William had heard us saying that we had to grab our cameras and so he insisted that he had to bring his camera too. It's a good thing it was already in the car, because there's no way I would have taken time to find it, and we probably would have had a very mad 2 year old on our hands. 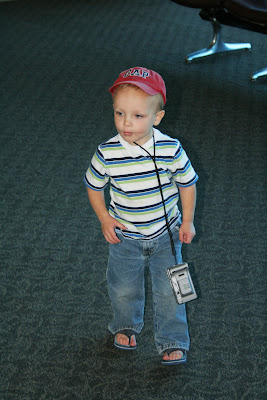 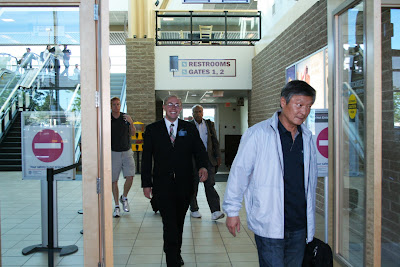 Of course Mom gets the first hug :) 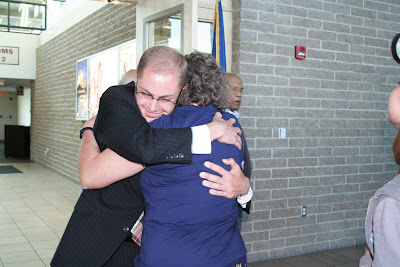 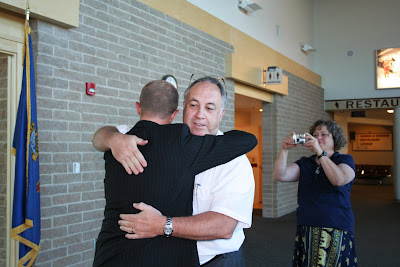 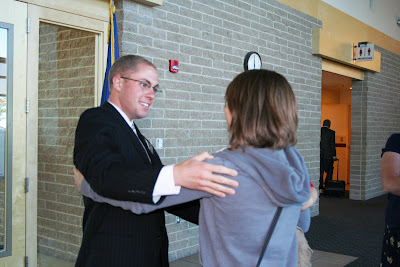 Meeting Isaac for the first time 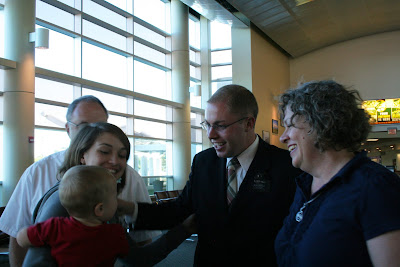 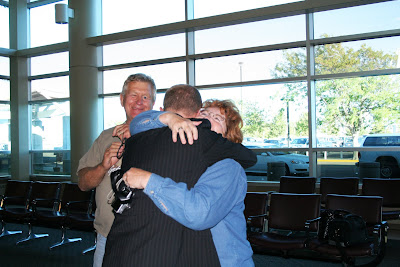 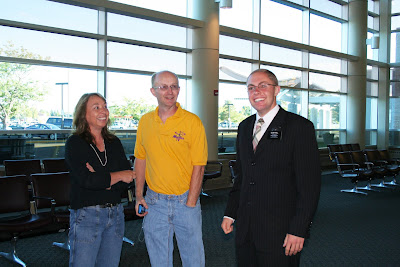 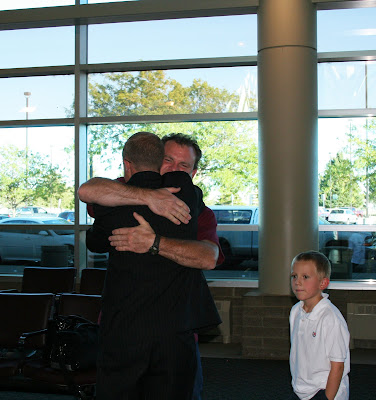 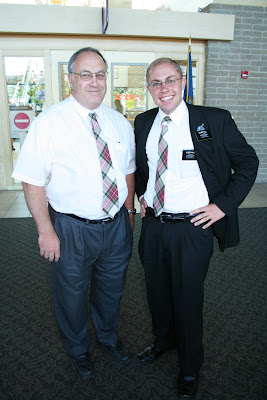 It's so fun to have Tim home, even though it adds to the already considerable chaos at this house! And of course my kids already love him!
Posted by Cutler Family at 4:02 PM 2 comments: