It must be getting to be spring, because suddenly my desire for cleanliness and organization (which all winter has been a vague wish that the house was clean and organized, and that someone else would do it) suddenly became a fixation with NEEDING to clean and organize, and being frustrated when I can't.
The thing is, I actually really enjoy cleaning, organizing and de-junking.  Just not so much with the kids around.  Katherine had the big boys over last week and I was able to get so much done, even with the baby. When they came home quotes like, "trying to clean the house when kids are little is like trying to brush your teeth while eating oreos," and "trying to clean the house while the kids are little is like trying to shovel snow in an avalanch" kept coming to my mind.

I swear, those boys can get into, spread around, dismantle, and generally HELP so much!!

I was able to get their room done, though, including de-junking their toys, rotating clothes, cleaning their mattresses with baking soda and lavender, cleaning out closet and drawers, and behind their bed. Seriously, if I am ever missing something I will look behind/under their bed first thing, because that's probably where it'll be. Their room was the very worst so I feel really good about getting it done.  Too bad they aren't as keen on keeping it clean as I am.
After their room was finished I moved onto my room.  The problem with this room is I've had to do it little by little since Elijah sleeps in there and I can't work while he's sleeping.  I much prefer just getting in and getting it done, but since lately he's become persnickety about where/how/sleepingingeneral  there isn't much I can do about it.  So right now my room is in a semi state of organization.  Hopefully I will get it finished by spring cleaning time next year.


And just to add onto last time's post here's another sleeping picture of Isaac.  He must have needed a nap this day because he fell asleep while watching a show and then continued to sleep through Elijah pulling his hair, my piano lessons and then when I was trying to wake him up so he'd sleep at night he said in his sleepy voice, "Mom...I just want to rest!" 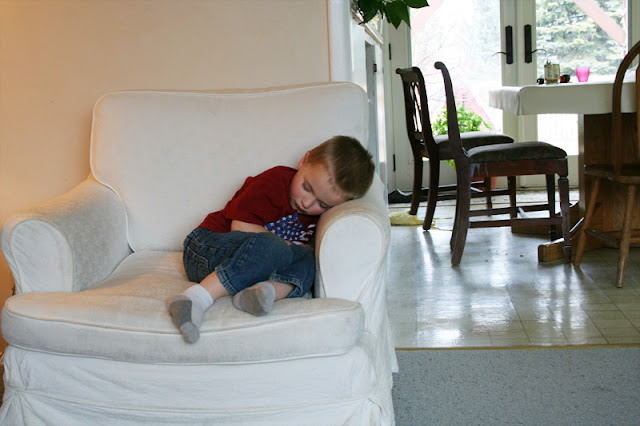 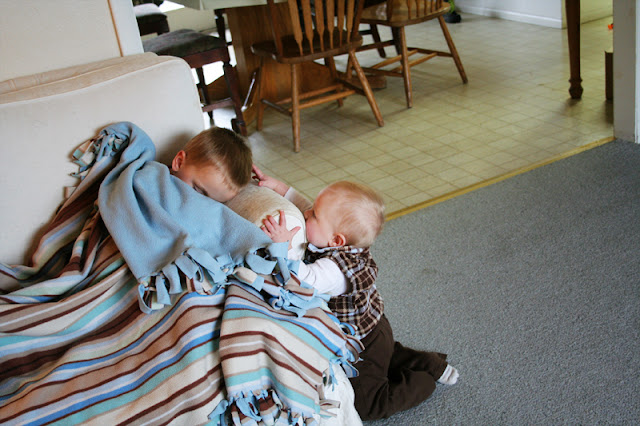 In the past few weeks we've found Isaac asleep in several funny places.  The first one was after church.  We had all been eating and talking in the kitchen when I suddenly realized that Isaac was being very quiet.  We went looking for him and it took us a few minutes to realize that he was under the baby blanket in the living room.  I thought he was just hiding, and so I started acting like I couldn't find him, but uncharacteristically I didn't hear any giggling or see any wiggling in response.  It was then that I realized he was actually sound asleep under that little blanket.  Haha! 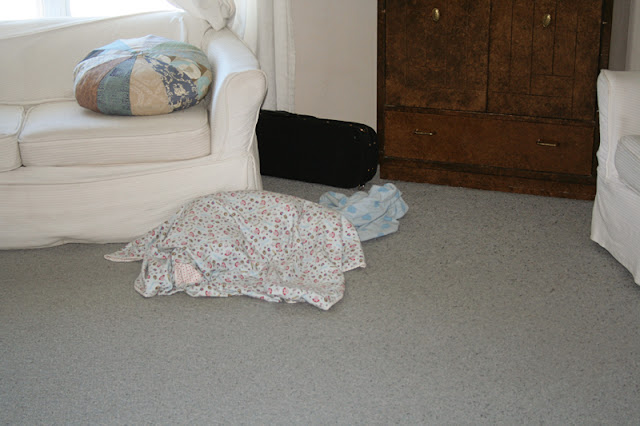 These next two were both times that he was supposed to be asleep in his bed, and Chris and I had gone upstairs and then came down a while later to find him asleep playing with legos under a blanket: 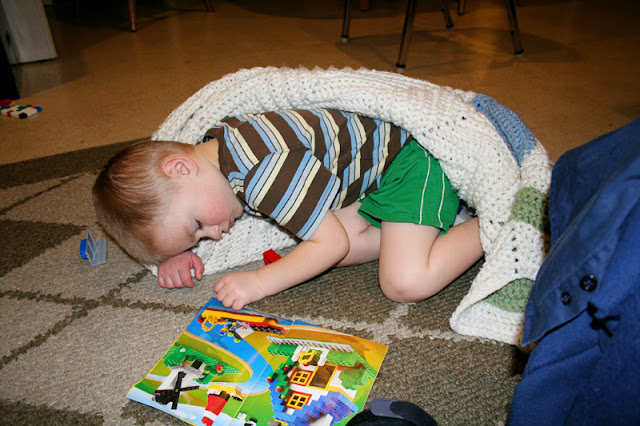 and another time asleep in our bed obviously having been looking at books: 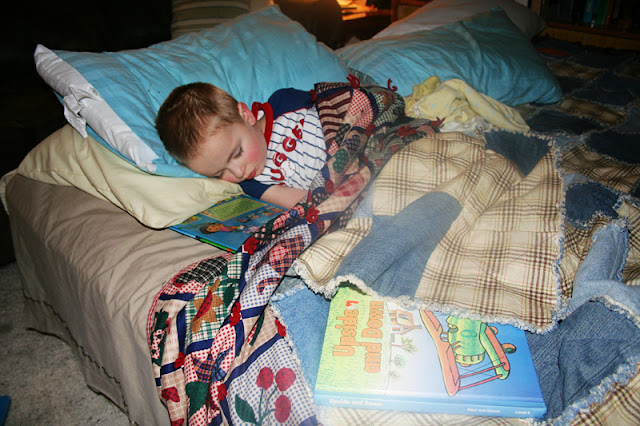 It's hard to believe our Elijah baby is almost 8 1/2 months old.  I hate that this baby stage is going by so quickly, and it seems even quicker with him because he is so anxious to keep up with his brothers.  He started crawling a few weeks ago and was starting to pull himself up on things even before that.  Neither of the other boys were even close to this mobile at his age so it's a new experience.


Some of Elijah's favorite things right now (in no particular order) are:


1-Mom
2-Mom holding him
3-Waving
4-Mom nursing him
5-Bathtime
6-Playing games with Mom
7-Crawling everywhere
8-Sleeping with Mom
9-Standing up
10-Mom rocking him
11-Playing the piano
12-Mom carrying him in the mei tei (back or front-he's cool with it)
13-Clapping
14-Shopping with Mom
15-Bananas
16-Watching his brothers and laughing like crazy at their antics
17-Dancing (Soooo cute to see him bend his legs up and down and wiggle with the music!)

A funny little story: Last night a little while after I had put Elijah to bed, I was upstairs and started hearing him crying.  I knew Chris was downstairs and figured he would take care of it, but the crying went on and on and got louder so I finally went downstairs to investigate.  Sure enough, Chris was in the room with him trying to calm him down.

I stood at the door (semi-open) and listened to Chris talk to him when he suddenly said, "you little stinker!" and came out.  He looked at me standing there and said, "He keeps crying at the door.  He started crying louder when I came in and then just keeps craning his head around and crying at the door."

As soon as I walked in, Elijah stopped crying, gave me a big grin and acted all excited.  All I did was sit down in the rocking chair and hum a little tune and he settled himself right back down and was asleep again in about 5 minutes.  Little stinker!

Here's a video of Elijah's bath tonight.  He get's so excited when I turn the bath water on and then starts splashing like crazy the minute he goes in.  And yes, he does fall toward the end (oops-my bad for holding the camera!) but notice it doesn't phase him a bit.  Crazy kid!