This picture is missing him and we are going to be missing him all week!
(Please ignore the wild woman hair!) 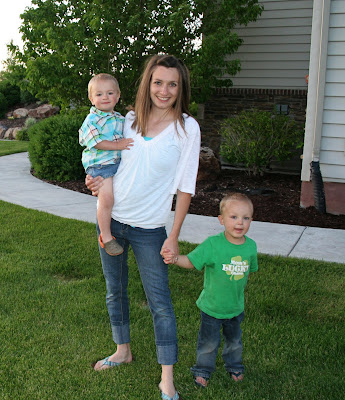 Chris got sent to work in Montana this week. He left this afternoon and will be home sometime Friday afternoon/evening. We are sure going to miss him, but we are grateful for this opportunity for him to make some big...er bucks. Ha ha! Hopefully we can just stay super busy so the time will go by really quick!
Posted by Cutler Family at 9:45 PM 2 comments:

I had to share this video of Isaac and my Mom playing and laughing early Sunday morning. I apologize to my Mother who appears in it in her bathrobe. :)

They had already been doing this for quite some time, so by the end I think he's pretty much exhausted from laughing (hence the sadness at being slightly bonked on the head).

The love of a parent

A couple of weeks ago Chris and I mapped out our week on Sunday and this was how it was going to go:

Monday: Chris goes fishing with a friend
Tuesday: We go fishing as a family
Wednesday: Chris works, I teach piano

On Monday (beautiful day), as Chris was getting his fishing stuff together William started begging to go with him, so we told him that we were all going to go fishing together "tomorrow". I had to remind him of this fact several times throughout the day to appease him.

Tuesday morning I woke up to the sound of wind howling around the house and cars splashing through water on the road. I immediately started inwardly praying that William would have forgotten all about our fishing trip, and that we could just forget that we had planned it at all.

Wishful and foolish thinking, I know, but I figured it was worth a shot.

A few minutes later William came bounding into our room yelling, "We're going fishing today!!!!!". I turned over to Chris, and said. "What are we going to do?" He replied, "Go fishing."

It was so.stinking.cold. It felt like a piece of February had inserted itself right into the middle of May. Chris even said that he would be deterred from going fishing on a day like that and that is saying a lot. Anyway, we got all the stuff together, loaded up the car. Ran through puddles and sheets of rain into Walmart to get worms, and headed off to Blacktail.

Once we got there I bundled the kids up, and we headed down to the dock where Isaac immediately started running back and forth from one side to the other, smacking his play fishing pole into the water. I was, of course, running after him frantically trying to grab him before he tripped and plunged headlong into the icy water. I could only stand a minute of this, so I took him back up the hill to the car to get the camp chairs. I got those set up, and the kids settled into them (Chris was getting the poles set up this whole time) and of course, Isaac stayed in his chair a total of .08 seconds. So... I was back to my old game of chasing him from one side of the dock to the other.

2 minutes later William was complaining that his hands were freezing, so it was back up to the car for Isaac and I to get the gloves. After the gloves were on the boys I tried sitting with Isaac on my lap, and casting a pole out, but once again that lasted for a couple of seconds and he was off again.

By that time we had been there maybe 15-20 minutes, and William (who had been sitting on his chair patiently watching his line) said quietly, "I'm so cold. I think I'm all done fishing." Chris and I looked at eachother, grinned, and I immediately scooped the kids up and started back for the car where I turned on the heat full blast and fed them cheese and crackers. Chris decided to stay for a couple more minutes to see if he could catch something and then call William down to reel it in, but he was so cold that didn't last long.

So... it was a fishless, miserable, nerve wracking fishing trip but we showed our son that we would do what we said we would do. Thank heaven he decided he was done so quickly!

I managed to get one video and it makes me laugh hysterically every time I watch it. Maybe it's the way my true feelings just jump out. :)