Here's some fun/random/new things that we have been up to lately.
Chris started school again this week. Here he is bright and early Monday morning getting ready to make the trek to Pocatello for Anatomy and Physiology. He has decided to start doing the prerequisites he needs for Physical/Occupational Therapy . It's kind of cool because his Anat and Phys Lab teacher is going into that program, so he was able to give Chris some more information and some pointers. Isn't he so cute?!! 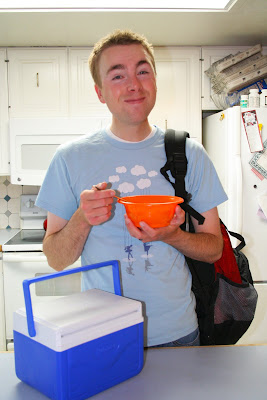 We bought a bike trailer so we can take the kids on bike rides. I haven't been able to ride my bike since the first summer we were married because I've either been pregnant or had a kid I couldn't take with me so I was really excited about this. Unfortunately the weather has been...well, lets just say we've only been out in it a few times, but the kids sure have a lot of fun! I think it will be great once the weather decides to become nice for real. 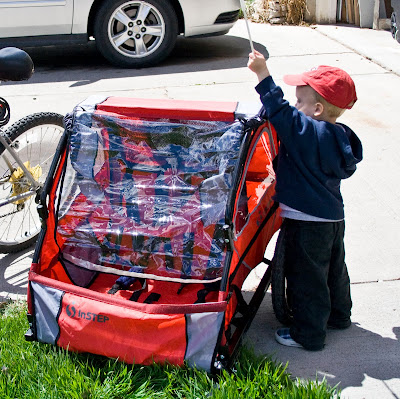 Last weekend my friend Kristel and I ran a 5K. It was a lot of fun and we shaved 6 minutes off our previous running time! 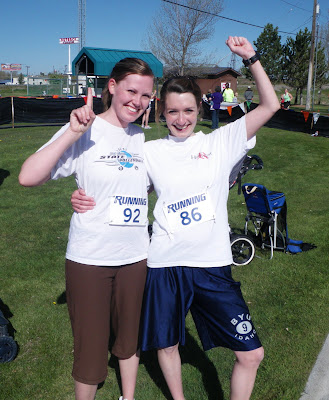 This picture just makes me laugh every time I look at it! If you can't tell, William is hiding in the closet with a bag of frosted animal cookies. Sneaky little bugger! 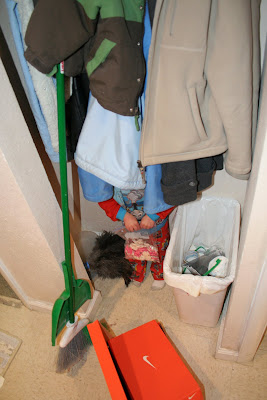 A couple of weekends ago my little sister Mary went to her first dance. It was a masquerade ball--hence the mask (which my mom made). She had a friend who was going to do her hair, but it didn't work out so I ended up doing it. I was rather proud. I thought it turned out quite well. Doesn't she look pretty? 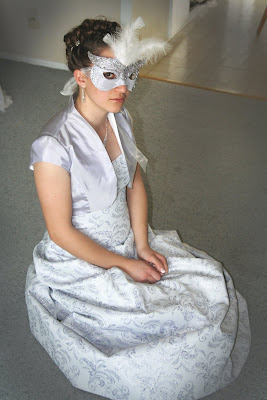 And here's a random cute one of the kids playing together while we were getting ready for a (very chilly) bike ride. 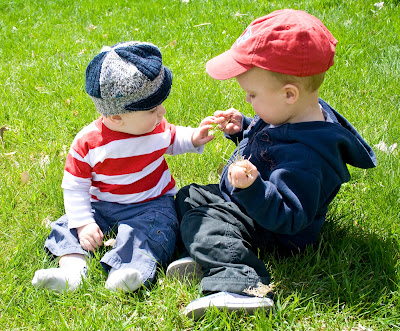 And last, but definitely not least, a video of our cute squishy baby!

William loves to sing. Lately he has been using the antenna on the cd player as a microphone. I have no idea how he even knows what a microphone is, but he does. :) Here he is singing one of his favorite songs, "I'm so glad when Daddy comes home." Sorry about the terrible quality. We are not happy with this camera, to say the least. :(

You thought you would defeat me today, but you didn't. Now that I've proven my strength could you please surrender? 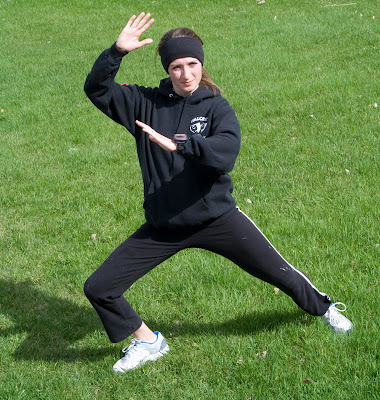 Don't let this completely unconvincing picture fool you. There's more to me than meets the eye.
Posted by Cutler Family at 4:22 PM 3 comments: 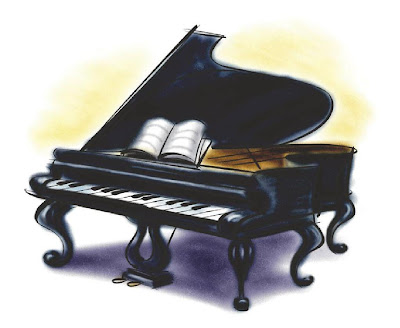 I have this chronic habit of playing the piano on whatever surface happens to be under my fingers. I merrily tap out whatever song is in my head, usually without realizing that I am doing it. While I was in college this habit became really really bad, but since then I've largely stopped doing it (probably has something to do with the fact that I no longer spend most of my waking hours in a practice room...).

Well...last night I was snuggled up to Chris, feeling ready to drift off to sleep when he suddenly asked me "If I were a piano, what kind would I be?".

"What?" I replied sleepily.

Apparently I had been playing the piano on him. :)

At first I thought, "Oh no. This is like that stupid animal game where you try to describe yourself (or someone else) as an animal." I've never really been an animal person, and don't feel that I relate well to them. But then I thought about it for another minute, and found I could describe Chris is piano terms. This is what I came up with:

Christopher James Piano
-An upright piano, one of the tall uprights, not the short ones
-Some kind of wood grain, not super dark, but not fake. Something natural and woody.
-An older piano that looks comfortable in its surroundings. Something that anybody would feel comfortable tinkering around on.
-Probably has some scuffs and dings
-Is impeccably in tune
-Has a surprisingly good sound for its outward appearance.
-Doesn't matter what brand it is, just has to sound good

Then I asked him the same question about me. Here's what he said:

Elisabeth Anne Piano
-Baby Grand
- An elegant* Black
-In very good condition, well taken care of, but not brand new
-Doesn't have a "bright" sound to it at all.
-Has a soft, pretty sound that is nice to listen to, but doesn't demand attention
-Looks elegant in its surroundings, but not ostentatious

*He used the word elegant a lot in his description

We interpreted our descriptions to each other, but I'm going to let you draw your own conclusions. I found that I really liked this game. Pianos are something I can relate to a LOT better than animals!

So if you were a piano, what kind would you be?
Posted by Cutler Family at 12:47 PM 3 comments: