1- I was taking some time to clean up my kids room and organize their toys this morning, and my kids were kind of in and out, but after a while they went upstairs, and I started vacuuming so I couldn't hear them.  I figured they were getting into some sort of mischief, but decided to live with it since I was getting something done for  a minute.  After I was finished, I listened for them, didn't hear anything (I had the vague thought that maybe they were in with my brother watching a video?) and decided to finish up what I wanted to do while they were out of the way.


Pretty soon though, the silence was menacing, and they weren't responding to my calls so I ran upstairs to see what was up.  The back door was open, and I looked out to see them tromping around outside in the howling wind with their boots on. Isaac had no coat and was dragging his bunny along,  but they were having a great time digging around in the planting beds,  wandering around the garden, and playing with the chickens.

It was such a fun moment as a mom.  Here I had been expecting the worst . . . food everywhere? fire? stuffing things down the toilet? getting into grandpa's medicine? destroying anything and everything? . . . and here they were having a grand old time with each other outside getting all sorts of dirty but also getting fresh air and not hurting anyone.

After yesterday and this morning (let's just say I haven't been the most patient) I needed a little reminder of the joy parenthood can bring. And the sweet innocence of my children.  How could I have ever wanted to put straight jackets on boys with faces like these? 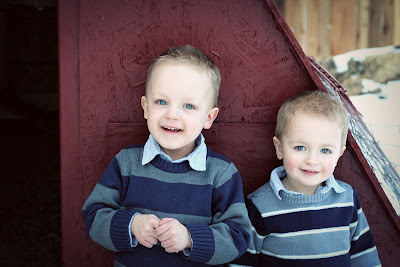 Lately Isaac has been singing songs to himself all the time.  I love listening to him sing "Jesus wants me for a sunbeam" while he is playing with his trains.

William has been very quick to help me out while I'm working lately.  He especially loves to help me dust.  I think it's because he gets to use the spray bottle, but it is very fun to have him come ask if he can help me and then cheerfully work beside me, and figure out what he can clean next.

I need reminders of these little things more often, especially when it gets to be this point in the winter.

It actually did turn out nicely though and since it's the first quilt I've ever really made all on my own and completed and such I thought I would post a picture. It's made from all of Chris's old jeans that had worn out, plus some flannel, plus some random fish thrown in there because I guess i just couldn't make Chris a quilt without fish on it.  It wouldn't seem right somehow. 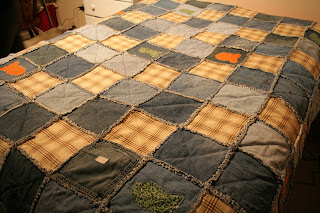 3- For various reasons I was inspired to sacrifice something for lent this year.  Lent is the 40 day period from Ash Wednesday (today) through Easter Sunday, and traditionally has been a period of fasting, prayer and self-sacrifice.  Although Latter-Day-Saint's don't traditionally observe lent, I decided that I would give up something for these 40 days this year since prayer, fasting and sacrifice don't exactly go against my religion.

I had a hard time coming up with something to sacrifice though, and I gave it a lot of thought.  Firstly, I had a hard time because I often have a really hard time deciding on only ONE thing when it comes to goal setting.  There's just so many areas in my life that need improvement... Secondly, I had a hard time coming up with things to "give up".  I have all sorts of things I think I should do...do in the first place, do more of, do better etc. but not a ton of things to give up.  Here's the list I did come up with that I could potentially give up.  It had to be something that would be an actual sacrifice.  So doing something like giving up eating tofu wouldn't cut it.

But here's the one I decided on:


I know it's cheating a little bit, since going to bed earlier is sort of on the "things I should do better" list, but at the same time it is making a sacrifice of all the recreational things I typically do after 10:00 or so (plus I figure I can kind of make my own rules... right?).  And it's about that time of night that I've completed all the getting kids to bed and night time chores and I usually sit down to relax and veg for a while.

Honestly, this is going to be pretty hard for me.  But it's selfish as well, since I know I will feel so much better if I do it.  And maybe it'll actually become a habit in those 40 days...which would be awesome.

Wish me a greater amount of will power than I have previously possessed.  I am going to need it.