I have been wanting to take family pictures for a couple of months, but haven't really wanted to spend the money on them, so a couple of weeks ago we went out and tried to take them ourselves. Let's just say we got some cute ones of the kids, but none of our whole family. We came close though, and we figured that if we just got someone else to come along and make the kids smile we could make it work. So despite last Sunday being Fast Sunday and Isaac not having had a nap, I got the family (aka Chris :)) up and out, and my Mom and Tim were nice enough to come with us to help.

Tim ended up actually taking the pictures, and he did a great job for his first time ever trying to take pictures. However, since Issac hadn't had a nap he was very hard to get a smile out of. He wasn't crying, just completely somber. Most of the pictures turned out with his face saying "Are we done yet?". However, with much effort on the part of Grandma we managed to get a few cute ones and that was enough to satisfy me. Just in time too! It snowed the next day and every day since.

Anyway, here are my favorites. 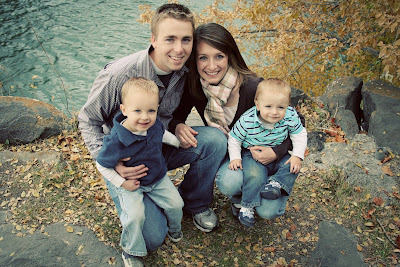 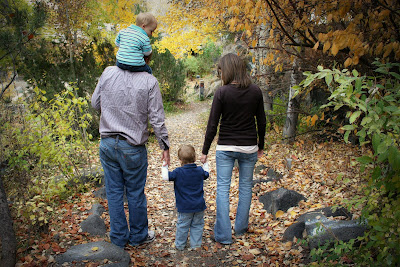 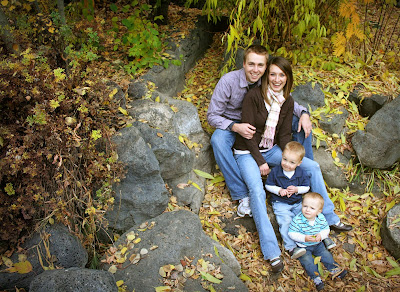 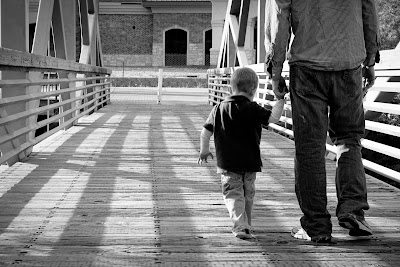 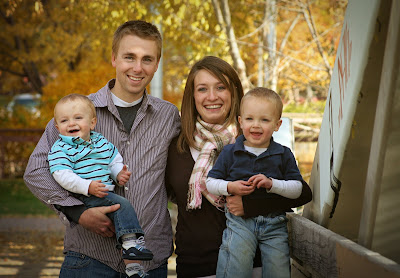 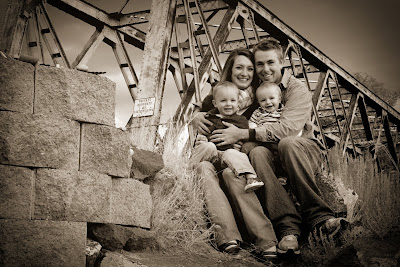 And here's some from our previous attempt. First a cute one of the brothers, and then one of just Issac. Don't think that we don't love William enough to give him his own picture. We do, it's just really really hard to catch him. We haven't gotten one that we loved yet, but I am determined that we will at some point! 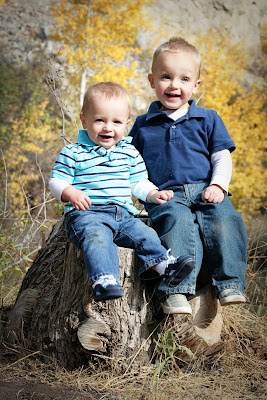 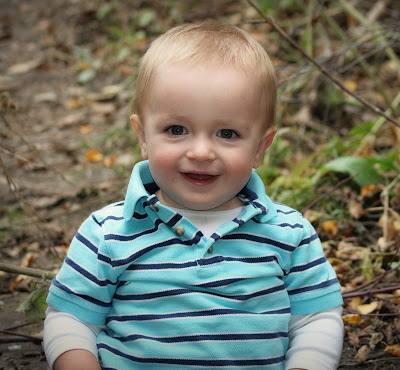 We had a three day celebration of Halloween this year. Festivities started Friday morning when a couple friends and I took the kids trick-or-treating at Melaleuca. Every year they decorate the building really awesome in different themes and everyone dresses up. You walk through the whole building, and get lots of candy. :) This year they had a Wild Wild West section (complete with gold mine) a Candy Land room, How to Train Your Dragon, Toy Story etc. We had a great time! Here's a picture of all the kids (minus Chandler who was being camera shy). Aren't they cute? 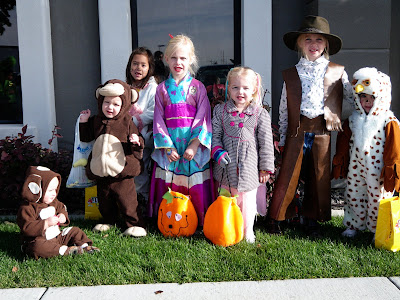 Chris had to work Friday and Saturday (and ended up working till after 11 both days) so Friday night I took the kids to his parent's ward Trunk-or-Treat and chili cook-off by. Since I was trying to keep track of two kids, hand out candy, get food for the three of us and eat while Isaac was trying to dump all the food in my lap, the last thing on my mind was taking pictures.

Friday night was one of the funniest parts of the whole weekend. We had borrowed William's monkey costume from Katherine (thank you-I really didn't want to make a "bird with wings" costume which is what he at said he wanted at first) and he had been VERY excited about it and hadn't wanted to take the costume off. Isaac wore the same puppy costume I had made for Will a couple of years ago. Anyway, in the middle of the night I woke up to William sobbing. Sometimes when he cries like that in the night he has to go to the bathroom, but can't wake up enough, so I went in to check, but he was obviously still pretty sound asleep. I asked him what was the matter, and in his sleep he mumbled "I wanted to be a puppy!!!," and then was back to sleep. It sure made me laugh that THAT was what he was dream-crying about!

Saturday was our ward's trunk-or-treat and chili cook-off (must be a Mormon thing :)). They had it at the park and had a little train ride and games, and it was a lot of fun. Here are my kids on the train. Isaac was pretty skeptical in this picture and was sobbing half way through, so I took him out. William wasn't quite sure he liked it either, but was excited at the beginning if you can't tell by his cheesy grin. 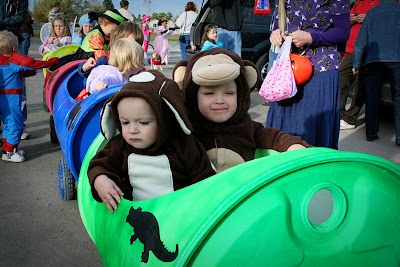 I came up with spur of the moment costume's for Tim and I to wear, and we had an epic Wizard's duel right in the middle the park. Obviously, I won. 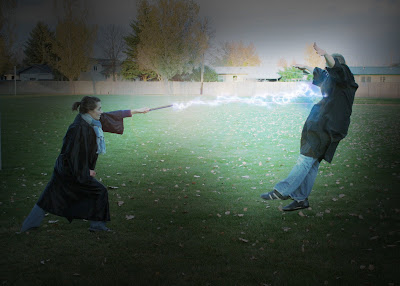 The kids had a lot of fun playing on the playground (and stuffing their faces with candy) and although I could not get a decent picture of my boys together, I did manage to get a couple cute ones separately. I really like my kids! 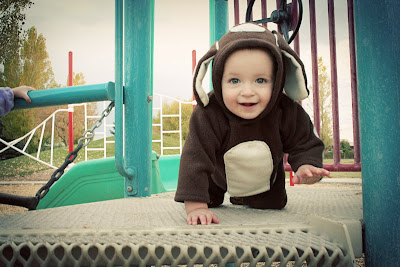 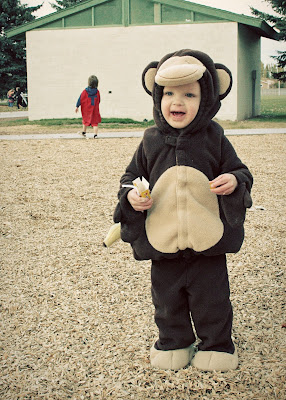 I think every kid should have an uncle Tim! They love him so much and he is so great with him. We are sure going to miss him when he goes back to college. 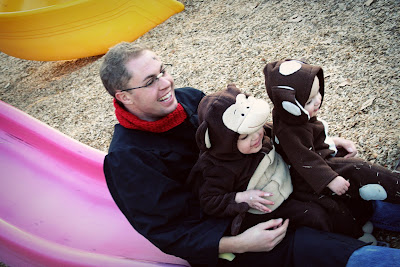 Here he is leading all the kids in a pagan ritual dance to the gods of autumn around Issac. Isaac looks pretty content to be king of the ceremonies, don't you think? 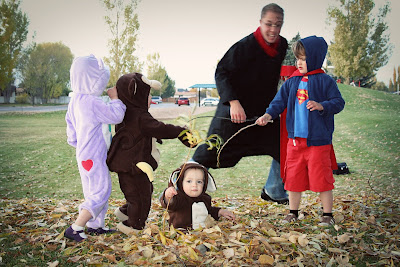 And here are some of my kids with their cousins that live here in town. Don't mind the comatose looks, they had devoured excessive amounts of sugar and red dye. At least Trey looks happy! 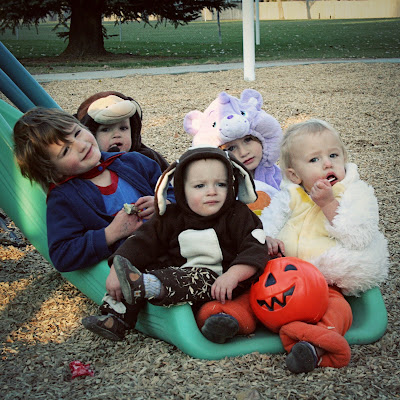 Sunday was the day we had with Dad, and so after the usual church, naps, dinner, etc. we carved pumpkins. Will had been so excited to carve pumpkins with Daddy that he begged to go home after Sacrament meeting so we could. He kept asking if it was time yet. How about now? How about now? :) Isaac didn't last very long into the carving process and had to be put to bed, but we did get a cute picture of him in his church clothes with a pumpkin. 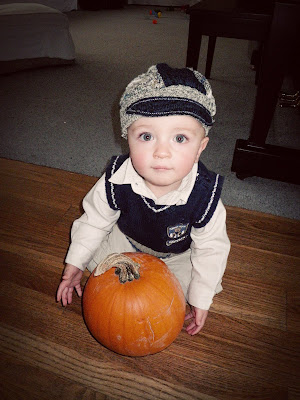 I usually don't enjoy doing things like carving pumpkins because I am way to perfectionistic and never live up to my own standards, but this time I just let go and actually had a lot of fun. Here we are with the finished products. William had insisted on a frowny face for his. Don't ask me why, it certainly doesn't match his face :). 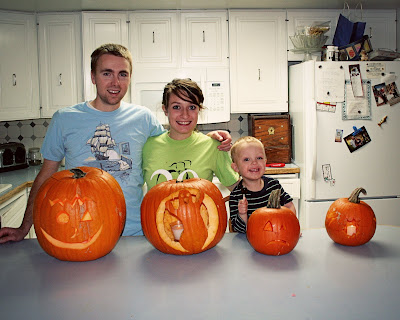 And here they are in the dark. Spoooooky!!! 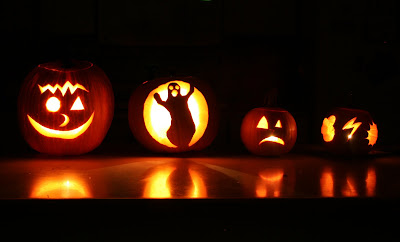 And of course, even though Halloween was almost over, we still put them out on the porch. Lucky for us, Popeye showed up just as we were putting them out! 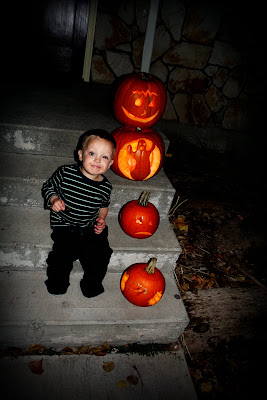 All in all it was a very enjoyable/exhausting Halloween Weekend!
Posted by Cutler Family at 8:02 PM 3 comments: